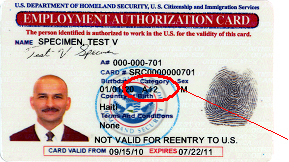 The “Advanced Parole” or entry permit, is a permit given by the Department of Immigration (USCIS) for a person in the U.S. who is not a citizen or legal resident to return legally and with authorization after an exit from the country. When someone who is in the country illegally for more than a year leaves the country, it causes the 10-year punishment law to be applied to them. That person is inadmissible to the country and has to stay out of the U.S. for those 10 years. In a Board of Immigration Appeals (BIA) decision published on April 17, 2012 and called Matter of Arrabally Yerrabelly, 25 I&N Dec. 771 (BIA 2012),” the BIA determined that an exit from the country with an entry permit does not cause the returning person to be inadmissible. The BIA analyzed Congress’ intent in passing the law (212(a)(9)(B)(i)(II)) and determined that the purpose of the law does not apply to individuals “who left and returned to the United States under an entry permit granted.” Although this case concerns individuals with pending adjustment applications who traveled with an entry permit, its meaning could extend beyond the details of this particular case. In the case of Arrabally Yerrabelly, a husband and wife entered the United States on tourist visas and stayed. More than five years later, they applied for adjustment of status under 245(i) based on an employment visa petition. The application took a long time and during this time, the couple applied for and was granted an entry permit on several occasions to visit their elderly parents, always returning within the terms of their entry permit. USCIS and later an immigration judge determined that the couple was punished for 10 years for leaving the country by having accumulated unlawful presence under INA § 212(a)(9)(B)(i)(II) when they returned to the United States with their entry permit. The BIA’s decision in the Arrabally Yerrabelly case rejects previous USCIS guidance and clarified its own jurisprudence on this issue. The Agency’s 1997 and 2009 Memos had concluded that the 10-year punishment applied to the exiting individual even if they had the entry permit. This interpretation is reflected in the warning in the application for the entry permit and the document giving the permission indicating that the individual may be inadmissible upon return. Also, the BIA, in an earlier decision (Matter of Lemus, 24 I&N Dec. 373 (BIA 2007)) stated that “inadmissibility under 212(a)(9)(B)(i)(II) may be caused by ‘any departure’ from the United States.” The case of Arrabally Yerrabelly modified Lemus’ decision by stating that exits with entry permission will be interpreted in the context of congressional intent. Therefore, the BIA concluded and declared that a person cannot become inadmissible under 212(a)(9)(B)(i)(II) for a trip abroad with an entry permit. What about others? Although the specific circumstances of the Arrabally Yerrabelly case have to do with an entry permit during the processing of an adjustment of status application, the logic of the case seems to apply equally to entry permits granted in other cases. For example, people granted Temporary Protected Status (TPS) are allowed to travel and return to the U.S. based on an entry permit just like those with DACA (or deferred action.) This is an incredible event and unexpected good news for several hundred thousand people. This is a big change in the way the law works. Individuals who have TPS or DACA and are married to a U.S. citizen, or have a U.S. citizen child over the age of 21, are now eligible for permanent residency without having to leave the U.S. for processing in their home country and without having to file a waiver! You will only need to obtain the entry permit, travel briefly, re-enter the U.S., and then apply for permanent residency. A word of warning, immigration laws are complicated and there are always exceptions to the general rule. For example, criminal convictions can be fatal to this type of process. You should always consult and use an experienced immigration attorney to help before making your plans for the greatest chance of a successful conclusion in your case.

Overturn a Deportation Order - Hernandez Case
TPS for Nicaraguans Ends and TPS Decision for Hondurans Is Still Pending
TPS Extension for El Salvador - Applications Must Be Submitted January 7 through March 9, 2015